In my city there is growing militancy concerning the need to protect open spaces. Every proposal to build a new project receives close scrutiny and more often than not vocal opposition. Many developers are reluctant to build in Haifa. Shortage of starter homes for young couples and upper-end housing for middle-aged people caused out-migration and a stagnant construction scene.

It is my presumption that the concern over open space is exaggerated. There is a natural economic tendency for the value of homes in proximity to open spaces to increase as these spaces become scarce. Thus, it is possible to think that there is an optimal amount of open space in each city. Beyond a certain point developers will prefer to build less volume and more expensive homes located next to parks.

In a paper published some years ago we presented a cellular automaton (CA) simulation model of a city and tested the results against an actual city [see Benguigui, L Czamanski D., Marinov, M., “The Dynamics of Urban Morphology: the Case of Petah Tikvah" in Environment & Planning B, 28, 2001, pp. 447 – 460]. The simulations results corresponded to reality for the test years and when extended into the future suggested that open space in cities does not disappear. Even when extending the computer runs into the far future, open space remains.

In a more recent project [see Benguigui, L., Blumenfeld, E., Czamanski, D., “The Dynamics of Urban Morphology” in Environment and Planning B, 33, 2006, pp. 269 – 284] we studied the spatial evolution of the Tel Aviv metropolitan area. The results suggest a particular pattern of formation of contiguous built-up areas. The number of built-up clusters grows and eventually stabilizes on a much smaller number. 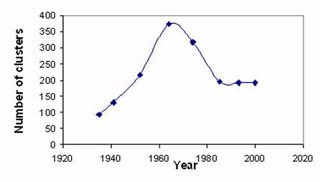 There seems to be an economic intuition and some preliminary evidence that the self-organizing nature of cities will not eliminate urban open spaces.
Posted by urban economics prof at 3:32 PM