Where does the city end?

This week while presenting an economic argument about the formation of cities, I was asked a seemingly simple question by a student in my urban economics course. "Where is the boundary of a city and where does the countryside begin?" she asked.

The question immediately reminded me of two urban economists who crossed my academic path. Richard Florida replaced me in the early 1980s when I left Ohio State University for my present academic home at the Technion. In a Newsweek article some months ago [July 3-10, 2006] Dick Florida, guru of the creative class approach to urban development, suggested that to identify borders of a megalopolis one should observe at night the pattern of lights while flying above the area.

This was the suggestion that I heard many years before from my teacher of urban economics, Seymour Sacks. Chomping on a cigar (it was allowed then) Seymour started each lecture with a number that he fished out (seemingly) at random from a volume of the census. Seymour also claimed that the boundaries of cities can be identified from the air and at night.

In a recent study two colleagues and I attempted to identify the boundaries of Tel Aviv, while ignoring municipal boundaries. The basis for our study was a series of historic footprints of the built-up area, such as the following picture for the year 2000. 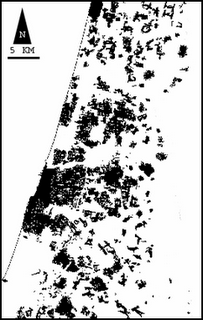 It is immediately apparent that depending on the resolution at which we observe an urban area all cities display lack of contiguity. There are vast amounts of open spaces without buildings. Some open spaces are small and create narrow corridors between buildings. Other open spaces are very wide.

We decided to consider street-wide open space corridors as part of built-up urban areas. We were able to identify a very large number of urban clusters within the Tel Aviv urban region. A description of this work was published as Benguigui, L., Blumenfeld, E., Czamanski, D., “The Dynamics of Urban Morphology” in Environment and Planning B, 33, 2006, pp. 269 – 284.

By starting at the historic core of a city and by marginally increasing the area of the old core we can repeatedly calculate the fractal dimension of the area. [See for example Benguigui, L., Czamanski D., Marinov, M. and Portugali, Y., “When and Where Is a City Fractal?” in Environment & Planning B, 27, 2000, pp. 507-519]. We reach the city's boundary at the point that self-similarity ends.

Obviously there is a shortcoming in this method in the sense that we do not take into account functional geographic flows, etc. However, there is an advantage too. The method does not rely on data that include accidental aggregations based on data presented at the level of municipalities.

Posted by urban economics prof at 9:02 AM

Mr. Czamanski,
i have found your way of defining the boundary of an urban agglomeration very interesting. However I would like to note that the Radial method might be preferable to the box-counting method in this case. By using the radial method in the way Pierre Frankhouser has proposed, we are able to define the exact distance from the centre where a depart from he fractal law is observed.
I am presently working on such an analysis in a case study at the area of Thessaloniki Greece, and i greatly admire your work on the fractal geometry of urban areas.
I would like to discuss these topics with you a little further and therefore i give you my email and webpage:
alagaria@arch.auth.gr
http://users.auth.gr/alagaria